YES! We have eaten baby rice. We have rolled over. We have been sleeping! 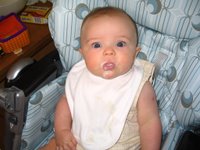 I feel like we've vaulted up seven steps of the evolutionary ladder and landed on some blissed out promontary. The spectacle of a well-fed and snoozing baby is almost elysian . Ahhhhhh... Would write more but there's burping and slurping to be done!
Posted by Steve Connor at 10:11 am No comments:

Deeply exciting. Although it’s been a surreal week (back from Cornwall, hundreds of emails missed, funeral of a friend of my parents, too much work, arrival of Anne’s Mum, Ellen, day-long team-builder on the Manchester Ship Canal) it’s ended with our little bundle of raspberry-blowing loveliness marking a high point - she had her birth registered at the US Embassy and got to visit No. 10 Downing St where a very, very lovely friend of ours works. As a result our surreal end to a surreal week featured two lots of metal detectors, scanners and security teams, not to mention a lot of queueing at the US Embassy (where I had to do a mini-oath at one point - no mention of Bush though so that’s okay). So now Maddie is officially a trans-atlantic sophisticate of the first order. What a beauty.
Posted by Steve Connor at 4:19 pm No comments:

The first series of terrorism nail-biter 24 starts with Jack Bauer (Keifer ‘growling’ Sutherland) gravelling to the audience: “My name’s Jack Bauer, and this is the longest day of my life.”

Melodramatic nancy! He clearly didn’t have MY Thursday in Cornwall!
Dirty bombs? Hah! Electrodes bringing you back to life after torture? Puhhh! Middle eastern terror cell kills your granny and forces you to walk down Hollywood Boulevard in a rubber dress with feather boa? Nothing. Nothing at all.

Try a baby, a hangover, a wasp sting, a litigative farmer and exploding white goods.
My Thursday started with the fugged head that only a crazed combo of Stella Artois, a bottle of pinot grigio and a good few shots of Amaretto can bring to pass. Coming too in the moorland cottage that had us living in a cloud for a week, I know I’d had one too many. I took my hangover and with Anne, Maddie and our friends Melie and Jackie we headed out to St Michael’s Mount.

My first trial came in a tiny village with ‘roads’ so small they seemed to close in on you like the rubbish compacter in Star Wars. Imagine my joy when a fire engine rounded the corner. I pulled the car up onto the pavement. The appliance squeezed by with the width of a cigarette paper to spare. Nice. We parked up, relatively unscathed and then we strapped Maddie into a harness and attempted the ascent of the mount. In essence, she wasn’t happy. She screamed. She squirmed. We go to the top and Anne and Jackie did a quick scoot around the monastery while Melia and I tried - and failed - to calm the little one down. In my panic I put my hand onto a live wasp. Add a sting to the hangover, the headache and the panic attack from playing twister with an emergency vehicle.

Then I phoned the farmer who had left a note on my car that morning, to my joy the crad stalwart of the community accused us of trespassing because we didn’t go through a field marked ‘Beware of the Bull’ (his bull) and instead parked up and walked down to the cottage we were staying at. It was all too much. I needed a cuppa and a piece of toast.

Back in the sanctuary of the cottage I switched on the cooker and waited for heat. Instead, in a half-calm, half-panicked monotone, Anne proclaimed ‘It’s on fire’ as the cooker gave up any pretense of utility and promptly exploded. Great. Just great.
Posted by Steve Connor at 4:17 pm No comments:

Work for any length of time with government agencies, regeneration groups or developers dangling at the end of a planner’s string and you’ll soon discover that one government agency above all others instills a strange and fascinating mix of fear, bemusement and derision. If you want to make eyes roll; if you want to hear a sharp exhalation; let those three words trip out: The Highways Agency.

Now I have my own reason to hate this shadowy group of tarmac-loving cone-deployers.
We’ve just returned from a week in Cornwall. Our moorland hideaway boasted scenic views, not to mention a crazy bull; but it also had no internet access, hence the extended silence on this blog. We struggled out of bed on Saturday and made an Herculean effort to get on the road by seven: Manchester to Cornwall is no mean feat.

We sailed past the RAC control helmet in Birmingham and within a couple of ours hit the crane-spattered estuary that is Bristol. We felt like Thelma, Louise and Louise Junior. We had the air beneath our wings. We were making fantastic time.
Then we hit the A30. I’ll make this short. No warning and we hit two sets of major road works. Three or four hour queues. Engines overheating. Babies screaming. In our car, no air conditioning and a very, very sweaty baby. Up front, Mum and Dad could do nothing but watch the bumpers in front and discuss the relative merits of pulling onto the hard shoulder and giving up. Like refugees fleeing a disaster zone, we crawled past other parents changing nappies on the verge, or calming down distressed toddlers.

Have a baby and all of a sudden a traffic jam like this is more than just an annoyance that may cause you to miss the first round at a local hostelry or have to wake up a landlady to reclaim a key; have a baby and a three or four hour tailback is frankly nothing less than an attempt on your child’s life.

The car is hot, she is hot, you are angry - with the Highways Agency.
As your baby grizzles in the baking heat, every traffic cone is mocking you; every yellow sign promising delays ‘until Autumn 3047’ is a two-fingered salute; every lane closure is a proximity fart to send you postal. Wrong wrong wrong.

The Highways Agency routinely puts children at risk. It also has no sense of irony or self awareness in its signing policy. It has a bad logo. Going a little further, I also suspect that it may have been taken over at some point by the disciples of Satan. Other Agencies get a rocket; others come under scrutiny; others get roasted by select committees - why not this one? It’s time for justice, that’s all I can say.

And don’t even start me on the caravan owners.
Posted by Steve Connor at 4:15 pm No comments: