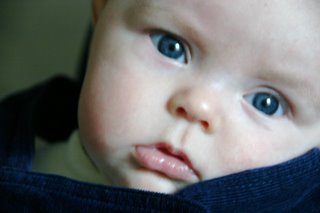 I suck, therefore I am.

That's the Maddie Mantra. The 'rooting' reflex that indicates a desire to feed has morphed into what can only be desribed as a 'Lactate Lunge'. This child LOVES to feed.
Posted by Steve Connor at 8:41 am No comments:

I have witnessed a spectacle that would have caused Dante to lay his quill aside. Facepainting, at a local park's festival: ugly; very, very ugly.

If like us you're just a few months into the baby game then you're probably just cottoning on to the fact that one of the crucial drives in every progressive, liberal parent's day is 'where to take the baby'. Never mind that the operation involves an entire cavalcade of nappy supplies, burp cloths, extra clothing in case of self-soiling (and that's just for daddy...); then there's forward planning discreet feeding locations, keeping a constant eye on menacing dark clouds, negotiating overly enthusiastic kerbs. It's a minefield, pure and simple.

But she's worth it. First of all there's the mental stimulation thing; human interaction, other kids, growling dogs. Then you figure it might exhaust the wee mite and the fresh air may give you a 50/50 chance of a decent night's sleep. Finally there's the important factor of not going stir crazy yourself and kicking off a nappy-whirling dirty protest in the spare room as cabin-fever really starts to grip.

You've gotta get out with the baby. Pure and simple.

And so yesterday's festival at Longford Park was a symphony of buggies, prams, papooses and toddlers in wellies. We even saw our midwife, Hayley. Along with the doughnut stalls, Friends of the Earth, tarot card readings and a fire engine there stood, aside from the throng, the facepainting stall.

We were with our friends Alex and Pam and their little ones, Cosmo and Charlie. Both are perambulating now (the kids, not our friends) and beelined in a blur for the daubing tent queue. Anne and I wandered off with Maddie, met friends, bought snacks, giggled, took photos, read War and Peace, and came back only to find that they were still there in the queue, grim-faced and grisly. A line of bored, tearful and disillusioned little people was moving as slowly as tectonic plates.

Disbelieving, we asked our friends and their friends what on Earth was going on, only to be met with a roll of the eyes and a world-weary look: "Facepainting. It's hell." They said, veterans of many such festivals.

So new top tip for new dads, courtesy of Anne. Paint their faces before you leave the house. Steal your partner's Bobby Brown if you have to, but get that visog painted. Safety first.

Posted by Steve Connor at 8:15 am No comments:

Anyone who has been to this blog more than once will have noticed a general 'slowing down' in the frequency of posts. This is because the 'Baby Time Vortex'(see blog entry from Tuesday, March 07, 2006) has kicked in with more ferocity than a wounded tiger looking for someone to blame... Apologies if you've returned to the blog and found a stale old entry at the top - will try to do better.Whole weeks go by and just blur out into a wall of temporal fuzz. The milestones are the giggles and the gurgles of a certain Duchess of the Diaper that you'll all have come to know well.

And speaking of Milky Chops, I'm pleased to report that the almost incessant feeding (fellas, we would NEVER be able to breast feed, it is a commitment of Herculean proportions) has resulted in Maddie weighing in yesterday at a handsome 12lbs 14oz. Half of all that weight is actually her cheeks, which redefine 'chubby'; another quarter is in her legs, near where her knees used to be.Beyond gorgeous and out the other side again. 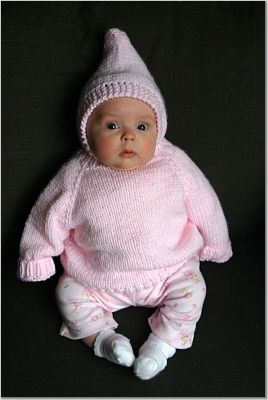 In fact, the last few days have been something of a revelation. After some torturous nights of utter sleeplessness we've managed to stabilise the situation a little with regular bathtimes and bedtimes and what might in GinaFordist circles be termed 'a regime'. Last night for example - she slept through with just a couple of feeding stops and Anne and I got to do a 'knackered couple on the sofa' live art installation that would have made Gilbert and George proud.
Posted by Steve Connor at 6:39 am No comments:

This week we've been as helpless as the stuffed giraffes and donkeys that dangle by their velcro threads above Maddie's car seat.

The week started with some impressive feats of endurance sleeping by Maddie. David Blaine would have been proud. Four hours here. Five hours there. We sat down for dinner. One night watched a movie uninterrupted. Mused about getting a babysitter and venturing out.

Ha. What do they know? Maddie's 'phases' run, to my estimation, on an eight or nine hour cycle. This week we've had great sleeping and then great torture as the poor wee button grizzles and grumbles through the night until deciding that 3.00 a.m. is wake-up time and enough of this family's valuable time has been wasted on slumber.

Yes. It's been a bleary eyed-end to the week, culminating in a trip to the hair salon for Anne that left me with the bundle of preciousness. Managed a shop or two. Drove around for a bit. Then little Maddie started to really get upset. I parked up near as I could to Anne's salon, strapped on the baby carrier, improvised a hat from a random top of Maddie's that was in the change bag and did a 'PANICKED DAD' hop across the front of the town hall to end up loitering suspiciously outside Andrew Collinge Hair Salon. Anne's hair looked fabulous; I looked like I'd spent a month being subjected to white noise torture.

Other than the ups and downs of sleep time, Maddie's doing fabulously. Plump cheeks signify the chubby 12 pounds that she's got up to. Smiling, chatting in what sounds like Esperanto, and dealing a left hook to those dangling giraffes (see above) have all come on in leaps and bounds in the last few days. What a treasure.

*Not that any aspect of The Maddie Experience (TM) has been in any way like a Shakespearean tragedy thusfar... more a comedy... in fact after a 3.00 am session with the Madster I can do a fine impression of Bottom...
Posted by Steve Connor at 4:46 pm No comments: